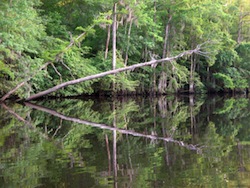 On Tuesday, August 9th, 2011 the Bogalusa paper mill, owned and operated by Temple-Inland, discharged chemicals into the Pearl River resulting in the death of wildlife and a deeply negative impact on the surrounding environment, businesses and individuals. Officials from the paper mill acknowledged that a mixture of pulp from the paper-manufacturing process and unspecified chemicals, “black liquor” poured into the Pearl River exceeding the plant’s environmental permits. The mill did not notify the Department of Environmental Quality of a discharge or a problem until the evening of August 13th, 2011. The plume of black liquor and dead wildlife flowed south where the river empties into the Gulf of Mexico disrupting the crabbing industry, and the tide repetitively pushed carcasses into the surrounding waterways, including Lake Catherine and Lake Pontchartrain.

This discharge by Temple-Inland killed hundreds of thousands of fish, mussels, aquatic life and quadrupeds, destroying the complex ecosystem that supports fisheries, tourism, transportation and livelihoods. The wildlife damage was severe, killing the Gulf sturgeon which is listed as threatened under the Endangered Species Act, ringed sawback turtles, multiple species of catfish, heelsplitter mussels, and numerous freshwater species were among the dead.

The Louisiana Department of Environmental Quality released a statement August 15th, 2011 warning the public to avoid the black liquor substance, foam, and any dead or floating fish in the Pearl River. It further stated that anyone who has experienced any illness possibly related to bodily exposure to the fish kill, such as skin irritation, infection, upset stomach, sore throat, or breathing difficulty, should seek medical advice.

Thornhill Law Firm was the first to file a lawsuit on August 17th, 2011 in Washington Parish court, on behalf of lead class representatives: Terral Evans, Dana Evans, Charles Blanchard and Shannon Williams, and currently all suits have been moved to federal court and grouped into one consolidated case. The U.S. District Courts Eastern District of Louisiana Judge, Lance M. Africk, has appointed Tom Thornhill as Liaison Counsel and has engaged a Plaintiff’s Steering Committee to serve alongside the Thornhill Law Firm to prosecute all claims against Temple Inland.