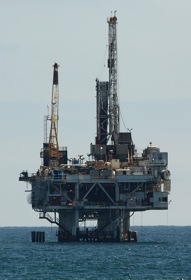 On the evening of April 20, 2010, fifty miles off the coast of Louisiana, Transocean's Deepwater Horizon mobile offshore drilling unit (MODU) drilling the Macondo well, exploded. Of the 126 workers aboard, 11 were unaccounted for, and after three days of searching an area of 5,200 sq. miles, the U.S. Coast Guard suspended their search. After burning for a continuous 36 hours, the $600 million dollar rig, which BP leased from Transocean, exploded for a second time, causing its slow descent in to the Gulf of Mexico. News programs and officials switched focus to the growing estimates of crude oil gushing from the severed deep-sea well, creating an ever-increasing 5,000 square mile oil slick.

Nearly two weeks after the Deepwater Horizon exploded, BP engineers began work on the first of two relief wells, designed to intersect the blown Macondo well 16,500 feet below the Gulf's surface. This delicate process was expected to take another two months to reach its target, and once completed would be used to pump heavy fluid and then cement into the main well, clogging the flow of oil near its source.

While the relief wells were drilled around the clock, the well continued to flow, with oil reaching the shores of Freemason Island. On May 7, 2010, BP lowered its first containment dome, about the size of a townhouse, in an attempt to collect the escaping oil. The method failed when gas hydrates, ice-like crystals lighter than water, built up inside the 100-ton metal container, plugging the top of the dome and preventing it from being effective. Around the same time, more than 260 vessels were deployed in cleanup efforts, and more than a quarter of a million gallons of chemical dispersants were spread on the surface of the Gulf. During this time, 132 miles of boom were laid to contain the spill and protect delicate marsh ecosystems, which provide hatcheries and habitats for thousands of wildlife species.

In mid-May, a thick, 22-mile underwater plume of oil was discovered by researchers near the Macondo well site. This undersea current of oil ranged from just beneath the surface down to about 3,300 feet, and researchers attributed its cause to the unprecedented use of topical chemical dispersants, designed to break-up the oil slick. During this time, the National Oceanic and Atmospheric Administration (NOAA) doubled the current no-fishing zone to cover an area of 45,728 sq. miles, or about 18% of the Gulf of Mexico. Federal and state governments implemented systems to test and monitor seafood safety, and prohibited the sale of oiled products.

On May 27, 2010, the White House scientific team, charged with determining the rate of oil flow, concluded that the 5,000 barrel-per-day estimation long maintained by BP and the U.S. Coast Guard was incorrect. Due to limited data, the conservative amount of crude was raised to 12,000 to 19,000 barrels of oil per day - around 29.5 million gallons total, far surpassing the 1989 Exxon Valdez disaster, which spilled 11 million gallons of oil off the coast of Alaska. In early June 2010, the estimated flow rate was upped to 25,000 to 30,000 barrels per day, equating to one Exxon Valdez disaster every 8-10 days.

Under intense pressure from President Obama, on June 16, 2010, BP agreed to construct a $20 billion dollar fund to compensate for the damage caused by the spill, which included hundreds of miles of U.S. coastline ravaged by the disaster, and imperiled the multibillion-dollar fishing and tourism industries. The agreement would not cap BP's total liabilities, but would be independently managed over four years, and include $100 million to workers idled by the six-month moratorium on deep-sea drilling that was imposed after the spill.

Recently, the Plaintiffs' Steering Committee (PSC) has announced a fully funded, no cap settlement in principle, intended to satisfy all eligible claims under the court supervised settlement. The agreement will resolve the majority of claims for private economic loss, property damage, and medical injury claims derived from the oil spill, including lost profits; sustained damage to coastal property, wetlands and personal property; sustained real property sales losses; lost subsistence use; claims under BP's Vessels of Opportunity Program; and medical claims related to the spill.

If you, your business or someone you know feels they were impacted by the BP Oil Spill and wish to learn more about your legal rights and the settlement process, regardless of your previous experiences with the GCCF (Gulf Coast Claims Facility), contact our office immediately, at (985) 641-5010, toll free: 800-989-2707 or by using the "Contact Us" form on our website.